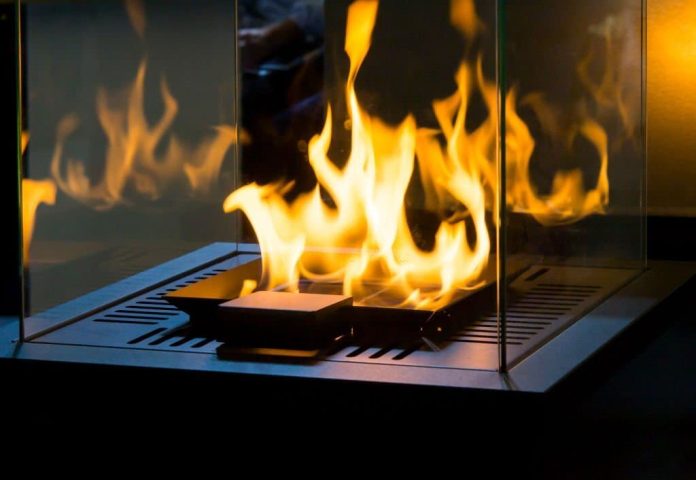 Apart from the conventional wood-burning types, fireplaces now exist in different forms that do not require the burning of wood. A typical example is an ethanol fireplace, which is not only eco-friendly but also cost-efficient and mess-free.

Everything worth knowing about ethanol fireplaces will be discussed in this article.

What does an ethanol fireplace mean?

Similar to a traditional fireplace, heat is generated when a fuel source is combusted. However, there are several other benefits associated with using ethanol as a source of fuel.

An ethanol fireplace can simply be described as a fireplace that has no vent and is fuelled by ethanol. What makes ethanol or alcohol a good source of fuel is that, apart from creating real flames, it produces no dangerous chemicals, smell, or smoke when it burns. As a result, ethanol fireplaces can be installed almost anywhere without any need for a flue, vent, or special chimney.

They exist both in built-in forms and in standalone, modifiable versions.

What is the operational mechanism of an ethanol fireplace?

Contrary to what you may think, bioethanol fireplaces are not complex, but quite simple.

While they run on ethanol, they require no hard gas lines, or electrical connections.

A burner and a frame are the two main components of an ethanol fireplace.

The burner is a vessel made from stainless steel, which contains the fuel. The frame, which basically supports the burner, is usually made from tempered glass and stainless steel, and, to a large extent, it determines how the fireplace is designed.

What to consider before using an ethanol fireplace

An ethanol fireplace should not be used in houses where there are pets, or small children. Additionally, the bedroom is not a good place for installing a bioethanol fireplace, and your living room must be well-ventilated if you prefer to use it there. In other words, indoor rooms are not as convenient as outdoor areas when it comes to utilizing ethanol fireplaces.

Where should I place the fireplace?

The fireplace should only be installed in a place that has no paper or wood lying around. If you want to mount it on a wall, make sure you get appropriate advice regarding the safety distances.

How do I refill the ethanol fireplace?

The process involved in getting an ethanol fireplace refilled should not be taken lightly. When the fireplace is still hot or burning, don’t refill it. Read the operating instructions to know how long you have to wait for the fireplace to cool down before it becomes safe to refill it. The actual amount of bioethanol that the fire tray can contain should also be noted in advance. Do not get it overfilled, and close it as soon as you are done and never keep the bioethanol close to the fireplace.

Putting on the fire

Features of an ethanol fireplace

This section highlights various positive features of an ethanol fireplace.

One remarkable aspect of an ethanol fireplace is that you don’t need to own your apartment, or have a chimney in your house before you use it. This means they can be used in rented flats with no chimney.

Another interesting thing is that bioethanol burns without producing any smoke or soot, which shows that it takes much less effort to maintain ethanol fireplaces than the wooden types.

You can also move it easily and place it wherever you want in your room, which makes it suitable for people who move often, or like to switch between rooms.

Apart from very small quantities of water and carbon dioxide, bioethanol does not produce any dangerous gases when combusted.

Furthermore, it is very simple to apply. All you have to do is visit any DIY store close to you, purchase bioethanol, and put it in a burner. In the twinkling of an eye, you will see an amazing fire spectacle. Obviously, sitting by the ethanol fireplace is cool way to spend the evening, isn’t it?

Downsides of an ethanol fireplace

While an ethanol fireplace clearly has lots of advantages, it won’t be fair not to mention its disadvantages.

You cannot rely on it as a primary heat source, considering that it may not produce enough heat to keep your house warm. Notwithstanding, you can get sufficient heat to help you cope with the cold winter days if you combine it with a heater, or any other heat source.

The burning of bioethanol also produces offensive odours. To address this, make sure your room is properly ventilated.

In addition, you must not forget that the flames are real and that you might get hurt if you continue to add ethanol without caution. To avoid putting yourself in harm’s way, do not add ethanol when the burner is still hot, but rather wait until it becomes cool, because adding ethanol when the burner is warm could lead to an explosion. An ethanol fireplace is, however, harmless if handled with common sense.

Is investing in an ethanol fireplace worth it?

It all boils down to what you need. An ethanol fireplace can be of great benefit to you if, for instance, you stay in a flat and want to enjoy the cosiness that comes along with a fireplace. It is also beneficial to people who are fond of rearranging their interior, or moving frequently. Nevertheless, it is not a good investment for those who need a primary heat source.

Top Ways To Make Your Home More Comfortable And Cozy

You’ll Liven Up Your Game Room With These MTG Items

What Does A Good Indoor Ventilation System Look Like

How To Choose The Perfect Living Room Furniture For Your Needs