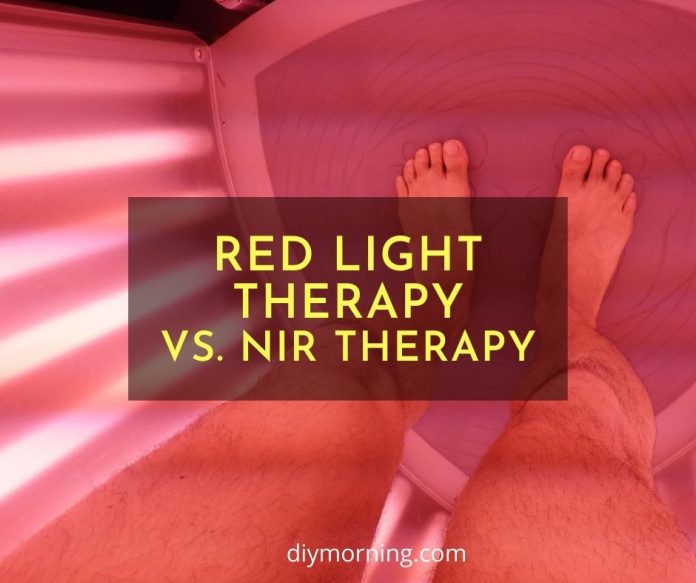 In this world of technological advancement, we have seen some great innovations, as well as some really not-so-bright ideas.

Out of the many things science contributed to, the focus on beauty, skincare, and healing has been aggressively expanding and one of the best anti-aging advancements we were able to formulate is Light Therapy.

The wonders one can hope to achieve through spraying light may seem laughable, but athletes and celebrities use it for a reason. There are many different kinds of varying light therapy at play, each having their own applications.

We will be discussing the details for red light and NIR therapy so you readers know which will suit YOU better.

Let’s dig into the science of it all.

What is Red Light Therapy?

As the name suggests, Red Light Therapy is a form of remedy that uses low levels of red light to boost your cells by inducing a biochemical effect to reinforce the mitochondria.

Mitochondria produces the energy in living cells in all living things and is called adenosine triphosphate.

This is important because red light enhances the mitochondria in your cells to produce more  adenosine triphosphate.

Red light therapy is primarily sought out for its rejuvenating and healing properties.

Back in the 90s, red light was used to contribute to the growing of plants, in space, by scientists.

The observation of the scientists showed that projecting red LED light greatly aided in the plant’s growth and increased photosynthesis.

What is NIR Therapy?

‘NIR’ stands for ‘Near Infrared’ and it’s very similar to the aforementioned red light therapy. This too emits low levels of light, but the difference lies in the effects, visibility of the light, and the it’s wavelength.

Near Infrared comes with longer wavelength, meaning they get to penetrate further into our tissues, as the frequency is inversely proportional to wavelength. Which comes with great healing properties.

NIR comes with varying ranges(700NM- 0.1MM), which contributes to its differing effects.

Recent study shows that near infrared light has the potential to cure neurodegeneration, like Alzheimer’s and Parkinson’s, but is too early to tell. But the fact that scientists are speculating this is something to look forward to in the future.

These are both on the rise and often confused with each other, but they are two different types of lights, as they come with varying properties, which in turn results in varying applications.

Near InfraRed lights emit at a higher frequency- about 810NM-850NM, whereas the red light therapy emits the light at a wavelength of 630-660 NM

According to these findings, wavelength exceeding 760NM is typically considered to be infrared, and is invisible, unlike red light.

Another notable difference between NIR therapy and Red Light Therapy is that, Infrared feels gently warm, as they produce the heat in our muscle tissues, and of course it’s

Now moving on to some of the physical differences between RLT and NIR Therapy. The first (RLT) is halogen based mostly(sometimes laser), whereas the infrared’s projected by LED. So expect greater dispersion from the latter.

Moving on to the energy delivery for the Optical Power Delivery (OPD).  NRI is an LED based light, so it will be measured in milliwatts, whereas halogen lights and lasers are measured in watts.

How to Get Red and NIR Light Therapy?

Light therapy has been booming in demand for quite some time now, and the more time passes, the more variety is brought into the market.

It used to be just the spa or your dermatologist’s office where you could get the therapy, however, these come in more portable options. You can practically order it online.

Light therapy is a way to treat countless conditions and manage many problems, some intense, some less severe.

The range of applications you can hope to achieve through light therapy is many in number, with each wavelength and frequency of light adding to the many shades of light therapy.

Moreover, the fact that light therapy is a non-invasive substitute to skincare and healing is definitely a game-changer, and one can hope that it may even be advanced enough someday, to carry out intense healing to replace most forms of invasive surgery

May it be seasonal affective disorder (SAD) or certain other conditions by exposure to artificial light and countless others.

You should have an insight by now as to what form of light therapy will help you with your particular problem. The decision to pick the right light is yours for the making. Happy Lighting!

Lighten Up! Ways To Brighten Up Your Home in the Darker Months

Why Is Proper Lighting Important In Home Decoration?

Improve Your Property in 6 Easy Steps With These Awesome Tips

How to Order Online Clothes with Coupons and Save Money?

Does Wrapping Your Water Heater Really Save Energy?

How To Improve Your Beauty Salon: 9 Useful Tips