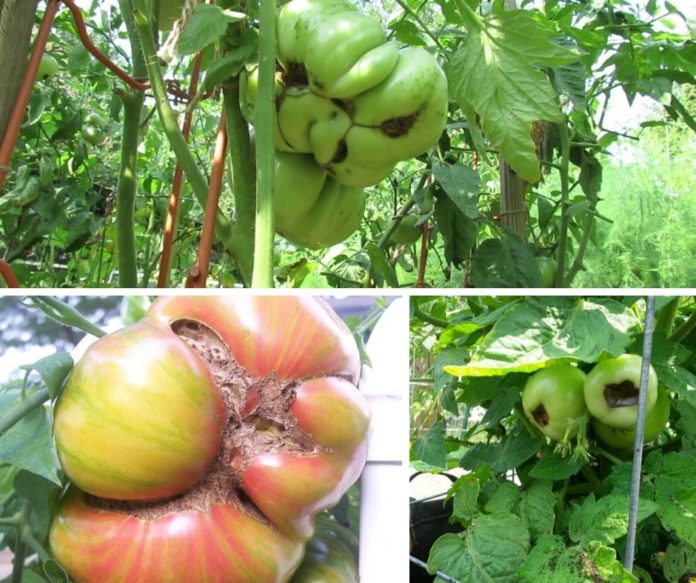 While tomatoes, peaches, apples and other fruits and vegetables are prone to catfacing, there are a few precautions that will stop or prevent this abnormality.

Catfacing (also called cat-facing) is a common deformity in fruit and vegetables such as tomatoes, and fruits such as apples, peaches, plums, grapes, apricots and cherries.

Symptoms of this problem appear as puckered, indented areas, holes, and brown spots on fruits. The malady is named for the shape of the deformities, which are often said to look like the face of a cat.

Both pests and weather problems can cause this issue. Catfacing does not make the fruit inedible, but it makes it impossible for commercial growers to sell the damaged fruit because it is unsightly. 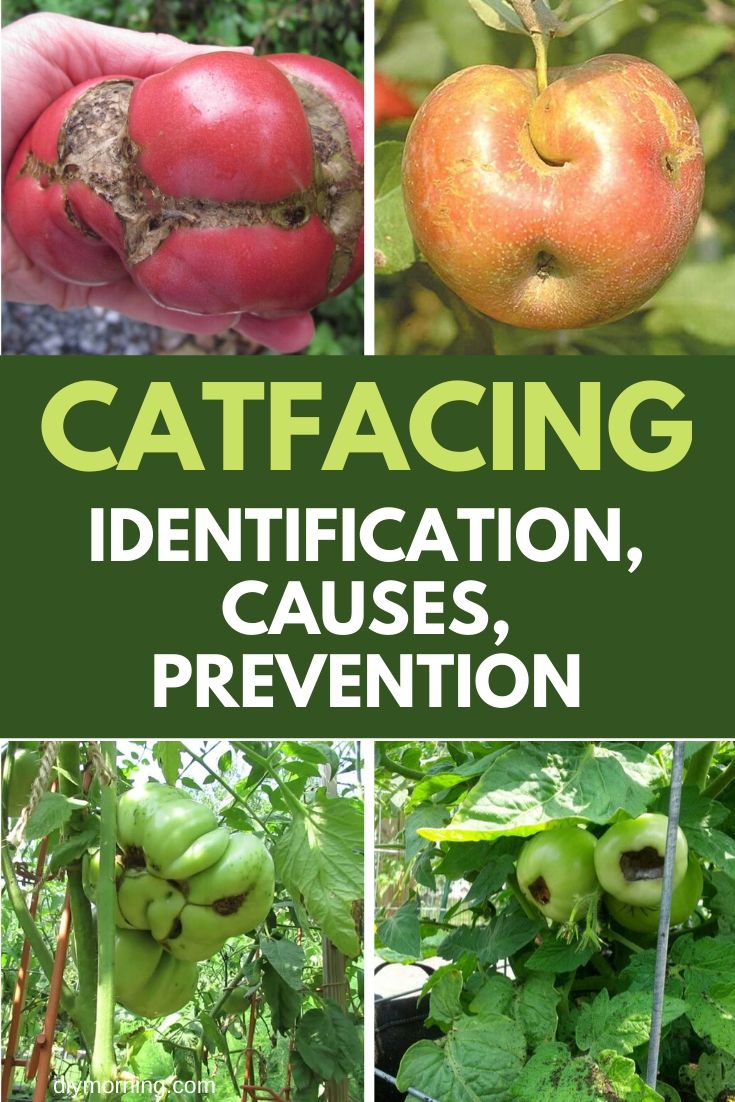 What is Catfacing and What Causes it? 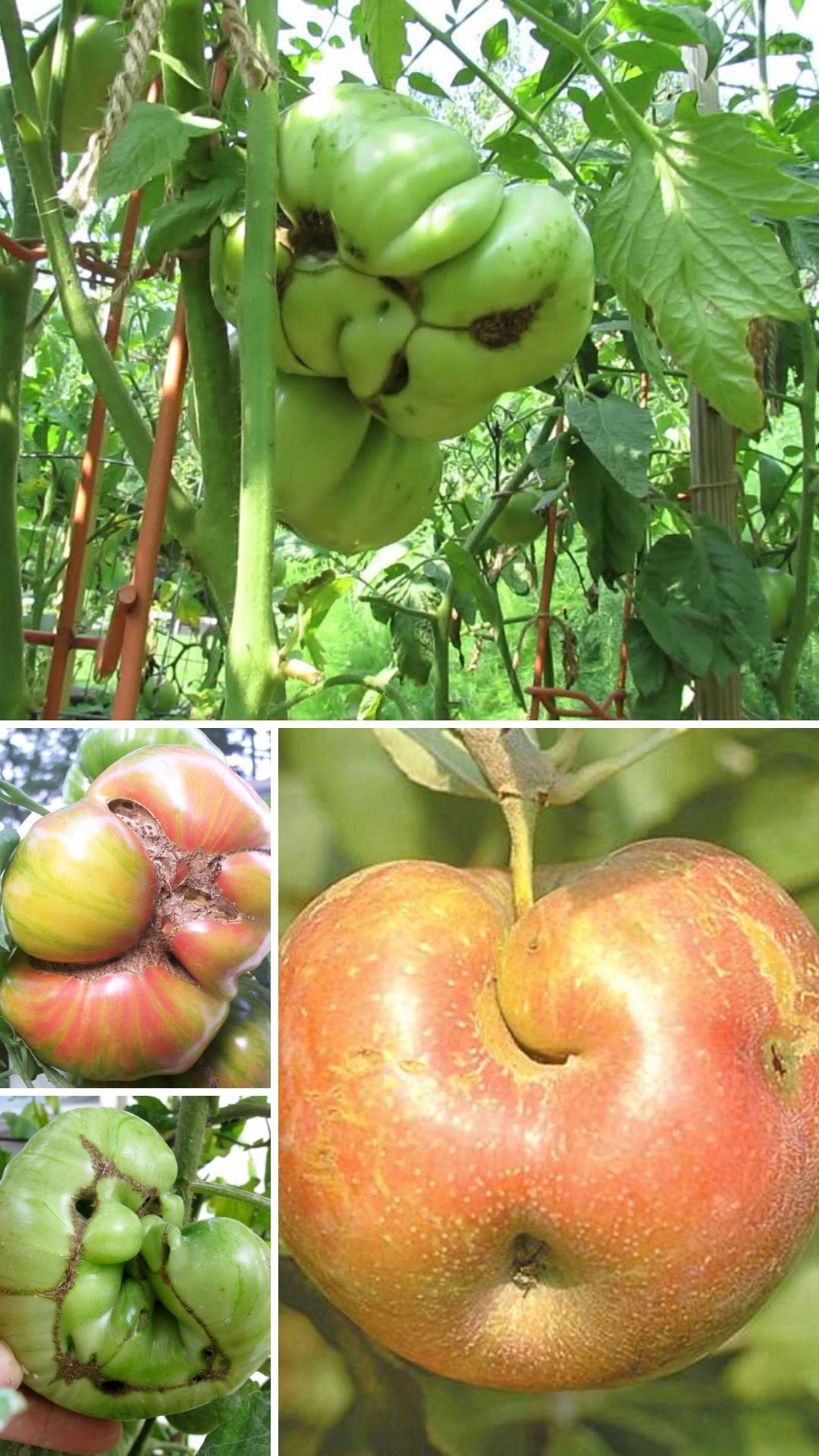 Cracks, brown scars, and puckering develop and become more pronounced as the fruit grows and pushes out and around the scarring. The open cracks sometimes lead to the fruit eventually rotting.

There are several causes of catfacing. This deformity can be initiated by cool weather occurring at the time when the flower is pollinated in tomatoes. Temperatures below 50 degrees can lead to erratic pollination.

The fruit or vegetable will not fully develop, leading to the distinctive scarring on the bottom. This explains why the first tomatoes of the year are more often affected than those developing later in the year. Too much nitrogen, erratic soil moisture and too much heat can also lead to catfacing. Some also attribute this problem to exposure to pesticides.

Another cause of catfacing is specific insects. Bugs that bite and pierce the skin of the fruit can also leave scars on the young fruit or vegetable.

Stinkbug, boxelder bugs, and the lygus bug are all typical culprits. Stinkbugs are brown or green shield shaped bugs that emit an unpleasant smell when crushed. Boxelder bugs have slim, ½ inch long bodies that are black with red or orange markings. Lygus bugs are oval shaped and come in shades of reddish brown, black, or pale green. Some of them have a paler V shape on their upper back.

These insects all live in orchards and feed on flowers as the fruit develops, and later on the fruit itself. While weather is an early season issue, bugs mostly bother fruit as it matures, in late summer and into fall.

To prevent catfacing in early spring, watch the weather carefully and protect young plants from the cold. If cool night temperatures are expected cover outdoor vegetables with a plastic tarp or a blanket. Some heirloom tomatoes are more likely than other plants to develop catfacing so protect them carefully.

Aside from weather, the three main culprits that cause catfacing are distinctive bugs and easily noticed when they appear in orchards or gardens. Check fruits and vegetables regularly for lygus bugs, boxelder bugs and stinkbugs.

Spraying is normally not recommended, but if it needs to be done, do it from before the blooms begin to when the young fruit is developing. If the invasion is not too bad it is best to just pick off the bugs. Some use a beating tray, which is a cloth stretched over a folding frame. Hold the tray under a tree branch and gently shake the branch, being careful to not damage tree.

A few simple precautions can make the area inhospitable for bugs that cause catfacing. Remove weeds so there won’t be a place for these bugs to have shelter.

Be careful to remove plant debris around the garden in fall or some of these bugs may over winter in the leaves and branches.

In general, look for varieties that are less prone to this issue. In tomatoes, larger fruits and heirlooms are more prone to catfacing than with other types. It is fine to eat catfaced fruit, though the texture may be unpleasant. Cut away the unappetizing parts and enjoy it.

Spark Up Your Summer Party for Adults With These Terrific Ideas

Why are Instant Pots Becoming a Must Have Kitchen Appliance

Chic Ways To Prepare Your Home For The Chilly Season